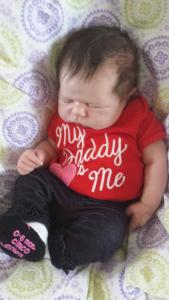 This picture says it all for me. Emma Rochelle was born in 2014 in the wee hours of the morning after a long labor and delivery. She was 8lb. 15oz. and 21″ long. I will never remember that moment when she finally was out in the world. I had been pushing for so long and I had nothing more to give. But now it was over, and she was here.

Only that wasn’t the end of my story, and it most certainly wasn’t the beginning. I want to tell you the full story of the Miracle of Emma and how God showed His hand every step of the way. So sit tight and hang on, because this isn’t a lazy river ride. This is a raging water ride.

It started back in 2012 when I first started having issues with PCOS. (I have a few posts about is like If Paul was Yoda and such so feel free to check them out.) I had my last period in October 2012 and did not have one until May 2013. I was told I would never have children and there was no reason for birth control. So my husband and I didn’t use anything caution and just went with how we felt.

I had a lot of growing up to do as I mention in my last post about how I was a walking jealous time bomb pretty much. I pretty much looked like this:

Not so pretty right? But it felt like my affliction was rubbed in my face everywhere I went. It seemed like Satan kept putting people in my path who were pregnant and I was going insane with jealousy. I hated it and  I was beginning to hate God for putting me trough it.

Then a wise friend took me in under her wing (even though I don’t think she realized she did) and had me become more involved with my church’s children ministry. I know weird right? Why would someone who can’t have kids want to bless and love on other people’s kids. Most of the parents couldn’t wait to dump their kids off most of the time. But that was why I was perfect for the job. I had the time and energy to pour into these kids that their parents didn’t have. I was able to be that extra someone that a mother relied on when she dropped her kid off in the nursery so that she could go enjoy the church service without having to worry about her child.

And it made me content. I was able to come love on kids and go home to my quiet house. It was pretty much perfect. I still had my health issues but my heart was being fixed and mended to be able to take on the task that God had set before me.

Now came May 2013 and I miracle happened, I had a period! It was totally not expected and I didn’t even have tampons in the house. I had to go and buy some that day. I thought they were never coming back so I didn’t buy anymore. Any way, that isn’t the point. The point was that God had blessed me with a period.

The next month, I didn’t have one and I wasn’t surprised. I knew that with PCOS my periods were crazy so I was just happy that I had had one that year. We moved at the end of June I my feet were so swollen that I couldn’t hardly stand on them. I thought I had just done too much with the move and had to put them up. Only, it didn’t help! They stayed swollen for two weeks!

Then my sister’s wedding was in July and I noticed my breasts were huge and they were sore. I had no idea what could be wrong and pregnancy never entered my mind. I thought I had breast cancer actually, but they had gotten so big, that I almost didn’t fit in my dress for the wedding. My mom said that was crazy and that something had to wrong. Meanwhile, I had been filling a baby bottle for a fundraiser for our local pregnancy center and thought I would ask them about it that week when I planned to bring in the full bottle. Maybe they could tell me if it could be serious.

After the wedding, on July 17th I went to the pregnancy center to drop off the bottle. I then had a feeling that I had to take a test. Didn’t know why since I couldn’t get pregnant but I did any way. And guess what? It was positive. God had blessed me with a baby. I didn’t know how long I would have this baby since there had to be a low chance that I would be bale to carry this baby to term but I was going to be thankful every day that I was pregnant.

It was a long pregnancy since we went day by day to see if I was going to carry my daughter to term but I did. I actually had my water break ten days late. I had to be put on that medicine to get my labor going since she was so happy to be in me, she didn’t want to leave. It took 25 hours to convince her to come out with 4 hours of pushing. I was so tired and I was so done. I just wanted to meet my baby that I had worked so hard to get here.

Though our journey home wasn’t done yet. After she was delivered, she had to spend 2 days in the NICU because I have gotten an infection from being in labor for so long. I was still unable to be with my baby until finally we got the green light and was able to bring her home.

It has been an interesting time since then. She is a very strong child and can be interesting to raise at times but that was how she got here. She needed her strong will to survive in the womb and it will do her well later in life. She is an amazing person and a true miracle. I can’t wait to see what God has in store for her. She is my sunshine and my biggest blessing.