I have always been told that unless it’s your time to die, nothing can happen to you. That God has Hid hand of protection over you and He won’t let anything happen to you unless He is done with you. Is this true? Well the apostles would surely say so. They went through hell and back with the many times that people tried to kill them. I mean John was boiled in oil! How do you survive being boiled in oil unless God had His hand over you and still has work for you to do?

So then I started thinking about my life (since I have been through a good amount but not as much as others) and about all the times that should have died. I almost wasn’t born that is how much satan has tried to bump me off. Then I almost died from liver failure as an infant, I was diagnosed (I should say misdiagnosed) with spinal meningitis when I was 9, suffered from many falls from horses, was abused by a boyfriend,  was misdiagnosed with leukemia, and would have died in child birth if it wasn’t for our awesome first world medical treatment. Hmmm… Why does satan want me dead so badly? He has tried many times and failed. I am just a lowly human who has no power right?

Oh you couldn’t be more wrong. Yes, I am human and yes I have no power in myself, but I have power through Jesus Christ to do things that simply scare the crap out of the devil. Me waking up every morning puts fear into his heart because I can mess up his plans with just the slightest act of kindness to a stranger. I am spreading to the love of Jesus everywhere I go and satan hates that.

He doesn’t want to have the love of God spread and preached throughout the world. He wants the world to stay in darkness and chaos. It a chess match that he shifted the weight too much to his side and he thinks we can’t win. But we can keep our king alive through the power of our King – Jesus Christ.

It is kind of like a game of chess. Jesus is the ultimate chess piece that trumps all the pieces. He can come in a wipe satan off the board and claim victory, but He uses little pawns and rooks and his knights to do it instead so at the very end end He will have the victory. Jesus is coming but right now his little pawns are out there with a few rooks coming in help the pawns and the knights to help them and the queen (Holy Spirit) to help with all. Yes each pawn will perish but the King has the final say. 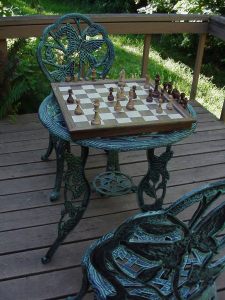 So if you are going through some hard stuff, see it as a blessing and not a curse. It just means  that satan is really afraid of you because you are meant to do great things for God, and I can’t think of anything better than to have little old satan afraid of me.