Ho! Ho! Ho! Tis the season for Christmas trees, lights and Santa Clause! I love Christmas. You can ask my husband, so I naturally love wearing Santa hats. The only problem I have found is that they don’t always fit and I am not thrilled with the options for colors and prints. So I said heck with it and decided to make my own. Here are the step by step instructions.

Things you will need:

Step One: Make the Pattern

If you are super crafty and know how to make a pattern by measuring your head, go for it. I do not know how to do that so I just used a Santa hat that fit me ok to trace for my pattern. Heads up – I am sort of a Potter fan so I wanted to make a Harry Potter Santa hat. Ergo the reason for this whole post. So the fabric you choose can be traditional or you can say heck with it and make a Santa hat that fits your style like me.

To make the pattern tape some printer paper together and lay your hat on it.

Now trace around the hat up to the pom pom. If the hat you are using is a little small on you then set your trace a little wider around the hat to give you extra room. Then cut a piece for the brim of the hat by measuring the thickness on your pattern making hat with an over hang of about a half an inch on each side of the hat. Finally, make a circle cut out for the pom pom. You can make this whatever size you want. I like littler pom poms so mine might be smaller than yours if you like big pom poms.

So your final cut outs should something like this. 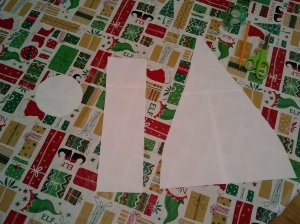 Step Two: Cut it Out

Next it is time to cut out your fabric. Lay the hat part of the pattern on your fabric and (using pins to keep it from moving) cut around the pattern. Make 2.

Now do the same for the brim. Make 2.

Then cut out the circle for the pom pom to make your final cut outs of your fabric look like this.

I started with the fabric for my brim, and the fleece I chose sheds so I ended up doing a rolled hem to keep it from snowing all over me as I wear the hat.

I then had to add it to my hat so I pinned wrong side of the hat and the right side of the brim together a sewed it, so when I turned it over, the seam would be hidden and you get that nice hemmed look at the edge of the hat. 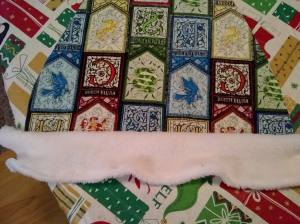 After you have sewn those together flip the brim up and sew it against the hat to keep it in place. Now that I think of it, you can also have hemmed it at this point instead of earlier in the process.

Once you have sewn both brims onto their appropriate sides, put the right sides of the hat together, pin, and sew leaving the bottom open of course since this is a hat and it has to fit on you head.

Now that you have something that is actually looking like a hat, it is now time to make the iconic pom pom. Take the circle you cut out, tread and needle, and enough of something fluffy to stuff it.

How I made a casing for the stuffing was by doing a loose stitch and weaving it on the inside of the what will be the pom pom.

Then I stuffed it and sewed it onto the tip of my hat.

Yay! You have now made your own one of a kind Santa hat!

Wear it where ever you want and show it off! You deserve it. And you will be the life of the party since everyone else will have a generic hat while you will strut in and go “see how awesome this looks? Where did I get it? Honey, I made this”. I hope you have a Merry Christmas and a Happy New Year.