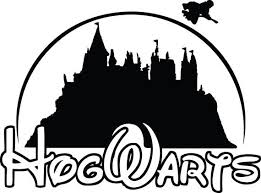 If you are like me you are all into Harry Potter, but you grew up in the 90s so you were bombarded with Disney Princesses. I personally grew up singing every single song and I can still to this day rock Disney karaoke on the drop of the hat. I spent my teenage years looking for my Prince Charming and cried at all the happy endings. But now I am an adult. So do I have to stop believing in magic? Heck no! Because I have been introduced to Hogwarts and all things Harry Potter and I am screaming “Oh Harry! Where have you been all my life!” (British accent poorly but appropriately inflected).

Since I am now a Potterhead, I of course got sorted on https://www.pottermore.com/ and I am a proud Ravenclaw! My husband was then sorted as a very accurate Hufflepuff and my daughter is too young to be sorted but we strongly agree she will probably end up in Ravenclaw or possibly Slytherin. I hope Ravenclaw since I am not a big fan of the color green but LOVE blue with a touch of yellow. Any way, it got me thinking about mixing the two classics… Could I still be a Disney princess fan while supporting fellow Ravenclaws?  then I saw this shirt (comes in a hoodie too) and it explained me perfectly. (And no I make no money if you buy it off this link.)

But now I am getting off track. My next thought I was thinking was which houses would the Disney princesses be sorted into if they attended Hogwarts? So I did some soul searching and here is the list I came up with and the reasons but first let’s have a review on the traits from each house. I got these from The Odyssey.

Gryffindor: The house of the brave, loyal, courageous, adventurous, daring and chivalrous. Those who stand up for others are typically Gryffindors. Brave-hearted is the most well-known Gryffindor characteristic, and Gryffindors are also known for having a lot of nerve. “Do what is right” is the motto Gryffindors go by.

Ravenclaw: The house is known for their wisdom, intelligence, creativity, cleverness and knowledge. Those who value brains over brawn can be found here. Ravenclaws often tend to be quite quirky as well. “Do what is wise” is the motto they strive to follow. Though Ravenclaws can be know-it-alls sometimes, they most likely do know what the wisest decision is.

Hufflepuff: This house values hard work, dedication, fair play, patience, and loyalty. Hufflepuff’s are known for being just and true. “Do what is nice” is their motto. Hufflepuff is known as the “nice house” and believes strongly in sparing peoples feelings and being kind. This is not to say that Hufflepuffs aren’t smart or courageous. Hufflepuffs just enjoy making others happy and tend to be more patient towards people.

Slytherin: This is the house of the cunning, prideful, resourceful, ambitious, intelligent, and determined. Slytherin’s love to be in charge and crave leadership. “Do what is necessary” is the motto of this house.

Ok, now that we have this to go by, let’s take a look at how I think the Disney Princesses would have been sorted if they ever had the chance to attend Hogwarts and say “see ya” to their love struck princes.

Although she is my favorite princess since I love being a mermaid and I even became one (check out This Post to see how), she is a Slytherin. OMG! What? First on the list and it’s a Slytherin? I know, but hear me out. Look back at the list and then think about Ariel’s motivation for the entire movie. I’ll wait. Now do you see it? Her motivation was completely selfish! She was cunning and resourceful for what she wanted by going to Ursula. She was also ambitious in becoming human, intelligent on how to get the prince to fall for her even though she had no voice, and determined to have no one stop her from getting her happy ending. She is a whole class Slytherin and I think the house would have been proud to have her join them at their table.

I am guessing you are figuring out the clue I am giving to let you know which house I think the princess in question is sorted in? Good. That was the point. I am having my Ravenclaw show a little LOL. But yes Rapunzel is also a Ravenclaw because she is very smart. She knows what she wants but she is smart on how to get it. She problem solves, and is very out spoken in her adventures with Eugene. Even though some might say she is Slytherin I disagree and say she is Ravenclaw so to the fact she is also very creative and wise as she helps the bandits remember their dreams and later to figure out the puzzle of her royal heritage. So good job girl and welcome to the Ravenclaw house!

Sorry dear Hufflepuffs but the yellow would not show up so the lettering is an orange/yellow color. But I think there is no argument when I say Snow White a true Hufflepuff. The truest of them all. She is kind and loyal to her friends even if she is a little light in the head, she still sees the good in people and just wants everyone to get along.

I had a tough time figuring Jasmin out at first since she is honestly a little of each house, but I finally settled on Gryffindor because she ultimately wants to do what is right. She believes in justice and changing things that are hurting those around her. she isn’t scared to state her opinion but to go a step further and take action by getting on a flying carpet and flying around the world with a complete stranger. So props Jasmin for making it into the Gryffindor house!

Merida to me was an easy pick. With her hot head and red hair, Gryffindor seemed natural, but it was her spirit for adventure and doing the right thing that actually won her the spot at the Gryffindor table. Hopefully she will keep her cool and not turn anyone into any more bears or ferrets now that she has a wand beside her bow and arrows.

“I know you! I walked with you once all the way to the Hufflepuff table!” Oh wait, that’s not how the song goes. Oh well it should since she definitely is one. With her tender heart and big dreams, Aurora joins Snow White as the newest members at the Hufflepuff table.

Need I really say it? She loves books and knowledge! That’s a huge sign that someone is a Ravenclaw! But not only that she showed great cleverness in getting her father released by taking his place and the wisdom to see the Beast’s heart passed his appearance. She spoke up to him and wasn’t taken back by his temper to be able to stand up for herself. She is a clever and smart lass and deserves to be at the Ravenclaw table who will later be seen in the library reading.

Now I have my own buff with Disney on the way they made this movie she is my great, great, grrrreeeaattt aunt. I am actually related to her sister. Any way, she earns a spot at the Slytherin table. I know. My own family member! A Slytherin! But the way that Disney made her look it was fitting. See, she might have said in her head “I’ll hang out with John Smith and our worlds will learn from each other”. Ok, good idea that almost earned her a spot at Ravenclaw, but when that plan failed and she wouldn’t back down from seeing John Smith behind her father’s back made it so she lost her wisdom seat. Instead she then showed that she was willing to do anything to get what she wanted even if it meant almost getting her and her love killed. And in the end she lost it all anyway. Good job, Auntie.

Do I really need to explain this one? She did what any respectable child would have done to protect her father. She was brave, loyal and courageous. Welcome to Gryffindor!

I actually had the hardest time sorting this one. Started giving me a headache. Ok, I had to through in a Sorting Hat joke. But it was Anna’s desire to have everyone together and getting along that showed me she deserved to be a Hufflepuff. She is loyal and kind and loves to be around people. The Hufflepuffs couldn’t have gotten a more perfect addition to their table.

Yup. You see the right color on Elsa’s name. Now I know you were probably thinking Gryffindor but let me explain, Yes, Elsa tried to do the right thing by hiding her magic, but was it really the right thing? Or was it her being prideful and letting her fear of failure control her? She does have a big heart but it almost cost her everything since her lack of letting anyone help her almost killed the one person who believed in her the most. Get a walking Elsa. You are a Slytherin.

Now this is the one princess I don’t know the most about since I saw her movie one time and it scared me and a friend so badly we kept every light on in the house until morning. But from what I remember is that she is super smart in her desire to be a restaurant owner. She is determined and witty, but she has a downfall in dealing with a voodoo master guy who turns her and a prince into a frog. Or something like that. Either way she gets turned into a frog and then has to use her skills and brain to get herself turned back into a human. So for those reasons she better getting studying for those exams because she is a Ravenclaw.

Another one is lost to the Slytherin table… Ok not really lost but Slytherin and Ravenclaws don’t usually get along so I see it as a loss. Once again you might have thought Gryffindor since she was brave to venture out on her own to save her island. But let me remind you the original reason Moana wanted to get on a boat and it wasn’t to really help her people. It just happened to work out that what she wanted turned out to be what the island needed and she did what she had to then to save it. Time to wave on down to the Slytherins, Moana. Maybe you can teach them to sail?

And lastly there is the sweet Cinderella. There is only one house that this princess falls into really. If she was a Slytherin she would have figured out a way to make her step family pay to gain control of the estate, if she was Gryffindor she would have just told them to pound sand and tell them to leave, and if she was a Ravenclaw she would have been smart enough to think of plan to remove herself from the situation. Also if you talk to mice there is really only one house for you. Hufflepuffs! Get ready to have more animal friends in your presence!

So there you have it. My list of how the Disney princesses would be sorted if they attended Hogwarts. Do you agree? Do you not? I would love to hear your respectful comments down below and remember, constant vigilance!